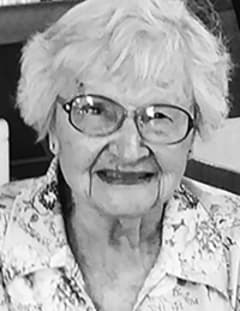 Dorotha Lorman, 98, passed away Thursday, Jan. 16, two days before her 99th birthday. Dot was born in Erie on Jan. 18, 1921, daughter of the late Freeman and Luretta Ploss Beebe.
After working as a nurse’s aide at the Shriners Hospital for Children, Dorotha and George were married and went on to enjoy 68 years of marriage.
In those years, she became known as an excellent cook featuring many wonderful desserts. She was an accomplished seamstress, did some crocheting, spent other times knitting many sweaters and became a master quilter. She completed 37 quilts, many of which are used by family members today.
Her love of books was extraordinary – she was known to read a book a day.
Back in the 1980s, she became “Swimmer of the Year” at the Erie YMCA.
She was preceded in death by her husband George in October 2009; all six of her siblings, Donald Beebe, Carl Beebe, Eleanor Henderson, Charles Beebe, Velma Robinson and Gerald Beebe and her grandson, Jeffrey Scott Lorman in 2007.
She is survived by her five children, George (Bette) Lorman, Sue (Ed) Sveda, Dorcas (Al) Palmer, Mike Lorman and Alison (Daniel) Jones; eight grandchildren and eight great-grandchildren.
A Funeral Service was held at the Dusckas Funeral Home, Inc., 2607 Buffalo Rd., by Pastor Dan Cass of Greenfield Baptist Church.
Interment followed at Lakeside Cemetery.
Memorial contributions may be made to Brevillier Village, 5436 East Lake Road, Erie, PA 16511 or Community Nursing Services of North East, North East, PA 16428.

Honor the life of Dorotha Lorman

Please share a condolence, photo or memory of Dorotha . We welcome all condolences that are positive and uplifting that will help family and friends heal.