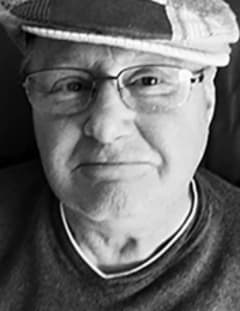 Chester M. “Chet” Szymecki, Sr., age 74, of Harborcreek, passed away peacefully, surrounded by his loving family, on Wednesday, Jan. 22, 2020, following a lengthy battle with Parkinson’s Disease. He was born in Erie on June 12, 1945, son of the late Chester and Laura (Pietrowski) Szymecki.
Chet was a 1963 graduate of the former East High School. He served honorably as an Air Traffic Controller in the US Navy and was employed as a medical photographer by St. Vincent Hospital for 25 years.
After his retirement, Chet was employed by Erie Country in the Sheriff’s Office as well as the Library System.
Chet was always known for his outgoing personality, sense of humor and amusing antics.
He was a member of Our Lady of Mercy R.C. Church, Gem City Gun Club and a lifetime member of the NRA.
Chet was an avid Jeep enthusiast, enjoyed off-roading in his yellow Wrangler and shooting of all types- targets and photography. His free time was often spent listening to music, making his trademark Chicken Noodle Soup and sipping on bourbon.
But above all else, he loved spending time with his grandchildren.
In addition to his parents, he was preceded in death by his in-laws, Leo and Theresa Ignasiak and brothers-in-law; Bob Kaczenski, Sr., Tom Liebel and Pete Alex, Sr.
Survivors include his beloved wife of 53 years, Susan C. (Ignasiak) Szymecki; three children, Chester M. Szymecki, Jr. of Yorktown, Va., Julie K. Manson (Kirk) of Pittsburgh and Michael L. Szymecki (Kelly) of Seattle, Wash.; two sisters, Charlotte Brennan (John) of Columbus, Ohio and Barbara Alex of Erie; seven grandchildren: Kiersten, Katy and Chet Szymecki III, Tori, Abbie and Jake Manson and Alex Szymecki; four sisters-in-law: Gloria Kaczenski, Leona Liebel and Maria Izbicki all of Erie and Cheryl Puntil (Ron) of Pittsburgh; a brother-in-law, Leo Ignasiak of Erie and several nieces and nephews.
Services were held at the Dusckas-Taylor Funeral Home & Cremation Services, Inc., 5151 Buffalo Rd. (at Hannon Rd. in Harborcreek Twp.), conducted by Rev. Msgr. Gerald T. Ritchie. Memorial contributions may be designated to the family to be distributed to Our Lady of Mercy Church and St. Jude Children’s Research Hospital.

Please share a condolence, photo or memory of Chester . We welcome all condolences that are positive and uplifting that will help family and friends heal.