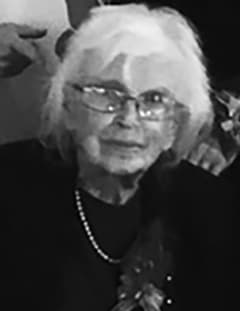 Thelma E. Deasey, 93, loving wife, mother, grandmother and great-grandmother, passed away Friday, Jan. 17, 2020, at Ball Pavilion with her family at her side.
She was born on Aug. 26, 1926 in Marion Center, Pa., to the late Harry and Lola (Learn) McMillen.
Thelma graduated Marian Center High School and later moved to Erie, Pa., to work at General Electric where she met her husband, Donald M. Deasey. They married on Aug. 14, 1950 in Salt Lake City, Utah and had just celebrated their 69th wedding anniversary.
For most of her life, she was a housewife and raised four daughters.
Thelma enjoyed being outdoors and was always working in the yard. She enjoyed her family dinners and was a great seamstress.
In addition to her parents, she was preceded in death by her infant brother Dale and sister Gertrude Goughnour.
Survivors include her beloved husband, Donald Deasey; four daughters, Karen Messina (Michael) of Erie, Kim Askey (Ron) of McKean, Jackie Bernatowicz (Mike) of Fairview, and Terri Wilson (Bob) of North East; six grandchildren, Shannon Feit (Justin), Tracey Farrington (Patrick), Mollie Punzel (Austin), Bobby Wilson, Jessica Komis (Andrew), and Claire Messina; five great-grandchildren, Devin Farrington, Ryder Farrington, Rory Farrington, Niko Farrington, and Ellie Wilson. The family would like to express their sincere gratitude and appreciation to the caregivers of Ball Pavilion for their compassion and kindness. Friends may call at the William D. Elkin Funeral Home, 65 South Lake Street, North East on Monday from 4:00 p.m. until time of a funeral service at 7:00 p.m. at the funeral home. Private interment Erie County Memorial Gardens. Memorials may be made to The ANNA Shelter, 1555 East 10th Street, Erie, PA 16511. Please send condolences to elkinfh.com.

Please share a condolence, photo or memory of Thelma. We welcome all condolences that are positive and uplifting that will help family and friends heal.