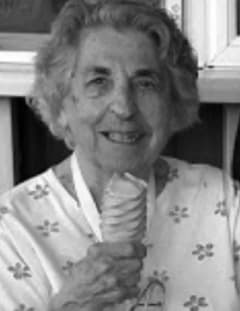 Marian Louise (Loop) Simpson, 94, passed away peacefully on Sept. 11, 2019, at Brevillier Village.
Marian was born in North East, Pa., on Jan. 31, 1925, to Howard Scott and Mabel Echo (Hayes) Loop and lived in North East until moving to Brevillier Village at the age of 89.
Marian graduated from North East schools and attended Mercyhurst University prior to working at Talon Industries where she met her husband Carl. She retired as the Heard Memorial School Cafeteria Manager in 1989 and went on to work many years as a volunteer at the 4 Nine Thrift Store. Marian was known for her hospitality and for feeding family, friends and anyone who stopped by. She shared her skills preparing many Soup/Salad luncheons, funeral dinners and welcoming travelers stranded during winter storm closings at the North East emergency shelters.
She enjoyed travel and adventure and sewing, quilting and rug-making and was a lifelong member of Park United Methodist Church.
She was a left-handed, chocolate loving, independent, determined problem-solver who loved reading, walking and sharing North East history—as the longtime registrar for the North East High School Triennial Reunion, Marian knew most of the residents of North East—and their maiden names. She was a patient teacher and lifelong learner who never thought she was too old to do something.
Marian was predeceased in 1993 by her husband of 43 years, Carl G. Simpson; son, Carl G. Jr.; and grandson, David; as well as her siblings, Charles, Herbert, Helen Golab, Robert and Frederick.
She is survived by her sons, William and Judy Simpson of Cumming, Ga., and their children Benjamin (Kristin) and Jeffrey(Jenny) and Calvin and Linda Simpson of Erie, and their children Amy (Gabriel) Miehl, Joseph (Elisha) and Kevin (Crystal); grandchildren, Cheryl Pochapin and Patrick (Karen) Simpson; and great-grandchildren, Jasmine, Evan, Alyssa, Zachary, Morrigan and Adeline Simpson.
Marian’s family is grateful for the Brevillier Village caregiving family who took great care of her. Thank you!
A celebration service will be held at a later date.
Memorial contributions may be made in Marian’s name to Brevillier Village, Park United Methodist Church or the 4-Nine Thrift Store.

Please share a condolence, photo or memory of Marian. We welcome all condolences that are positive and uplifting that will help family and friends heal.