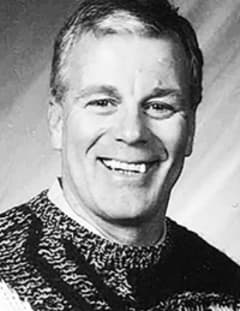 Jack Lewis Case, age 77, of Harborcreek, was surrounded by family and loved ones when he died peacefully, at home, on Wednesday, Jan. 29, 2020. Jack was born in Lockport, N.Y. on Feb. 7, 1942, son of the late Leonard and Wilma (Rutland) Case.
Jack graduated from Edinboro State College and went into teaching, later earning his master’s degree. He went on to teach for over 30 years, most of which time was with the City of Erie School District, where he was the history department head and football and golf coach at Strong Vincent High School.
Jack was a lover of the outdoors. He spent countless hours golfing, sailing and skiing with his family. He found enjoyment in his shared adventures with his boys, Pat and Tim, and his grandchildren, whether it be through scouting, coaching their sports teams or just watching them grow. He was a tremendous supporter of their activities and you could always find him on the sideline cheering them on.
Along with spending time with his family, Jack was also active in the community, serving as a long-term member of the Board of Directors for the Eastside YMCA.
He also served as a member of the Erie County Sheriff’s Office Dive Team.Whether he was working on a crossword or cheering on his kids and grandkids, Jack always had a smile on his face and was happy to see you.
He is survived by his wife of 51 years, Karen (O’Neill) Case; two sons, Pat Case (Erica) and Tim Case (Sara) and grandchildren: Lena, Olivia, Caitlin, Megan, Anna and Emma.
Family and friends are warmly invited to call at the Dusckas-Taylor Funeral Home & Cremation Services, Inc., 5151 Buffalo Rd. (at Hannon Rd. in Harborcreek Twp.), on Friday, Feb. 7 from 2 to 4 and 6 to 8 p.m.
A Funeral Mass will be conducted on Saturday, Feb. 8, at 11 a.m. at Our Lady of Mercy R. C. Church, 837 Bartlett Rd., Harborcreek.
Following the Funeral Mass, Jack will be laid to rest at Wintergreen Gorge Cemetery. The family suggests memorial contributions be made to the Pulmonary Fibrosis Foundation, 230 E. Ohio St., Ste. 500, Chicago, Ill. or the American Lung Assoc., National Direct Response Hdqts., 1200 Hosford St., Ste. 101, Hudson, Wis.

Please share a condolence, photo or memory of Jack. We welcome all condolences that are positive and uplifting that will help family and friends heal.