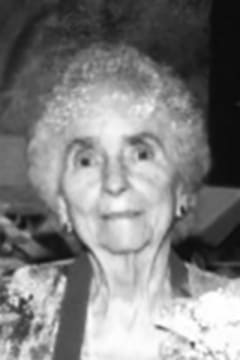 Etheleen (Lyons) Lafferty, age 90, of North East, went to be with her Lord and Savior on Tuesday, March 24, 2020, at Independence Court in Erie. She was born on Sept. 29, 1929, in North East, Pa., to the late Bert and Grace (Prindle) Lyons.
She was the second oldest member of the Greenfield Baptist Church, where she formally served as a deaconess and was a member of the lady’s aid.
Etheleen was very family-oriented, she valued every moment she got to spend with her family, especially her grandchildren. She was a woman of great hospitality; she enjoyed baking bread and making fudge for her guests.
Etheleen enjoyed making quilts, and crocheting beautiful afghans for all of her children and grandchildren. She enjoyed collecting hummingbirds, tying grapes in the vine- yards, fishing, and camping.
She was preceded in death by her beloved husband, Clayton O. Lafferty; brothers, Ray, Elmer, and Earl Lyons; daughter-in-law, Melinda Lafferty; and a son-in- law, Huy Do.
Etheleen is survived by her sons, James Lafferty of North East and Don Lafferty (Lois) of North East; daughter, Janet Do of Houston, Texas; grandchildren, Jamie Pati (Mike), Tim Lafferty (Waleska), Mike Nolan (JJ), John Nolan (Elia), Jennifer Hart (Pat), Megan Bolla (Joe), Julie Schuster (Rich), Vena Sampsel (Scott), Kim Armenta (Walter), Minh-Quan Do, and Mai-Linh Do; as well as several great-grandchildren, nieces and nephews.
Private services are being handled by the William D. Elkin Funeral Home, 65 South Lake Street, North East. Private interment will be held at North East Cemetery.
Memorials may be made to the Greenfield Baptist Church, 9028 Williams Rd., North East, PA 16428.

Please share a condolence, photo or memory of Etheleen . We welcome all condolences that are positive and uplifting that will help family and friends heal.