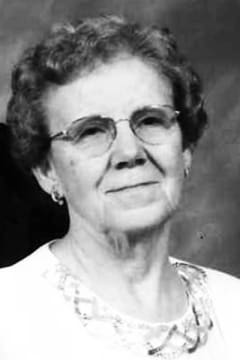 Dorothy M. Troyer, 90, of Gibson St., North East, Pa., formerly of Corry, Pa. died Sunday, May 31, 2020 at St. Vincent Hospital, Erie, Pa.
She was born April 19, 1930 in Miller, S.D., a daughter of Peter B. and May Ann Goscho Stutzman.
Dorothy moved with her family as a young girl first to Colorado and then to Spartansburg in 1941. She was educated in Spartansburg and Beaverdam. She worked at Cherry Hill in Union City for a couple years prior to her marriage.
She and her husband moved to Norristown, Pa., for three years as a conscientious objector. They returned to the Corry are and built a house on Route 6 where she lived for over 60 years.
Dorothy became a nurses’ aide at the Corry Hospital for many years, retiring in 1984.
She was a member of the Beaverdam Mennonite Church.
In addition to her parents, Dorothy was preceded in death November 6, 2016, by her husband, Maynard J. Troyer, whom she married June 24, 1948; a son, Jeffery A. Troyer; four sisters, Stella Sutzman, Gladys Hilker, Freda Ehrhart and Mary Ann Stutzman and four brothers, Frank, Raymond, Clifford and Walter Stutzman.
Dorothy is survived by a brother, Leonard Stutzman and his wife Marilyn of Harborcreek, Pa.; a sister-in-law, Wilma Jean Dean and her husband Richard of Spartansburg, Pa.; and a brother-in-law, Lawrence Troyer and his wife Evelyn of Indiana.
She is also survived by many nieces and nephews.
A private funeral service will be held. Burial will be in Lawn Cemetery, Beaverdam, Pa.
Memorials may be made to the Mennonite Central Committee Clean Water Program c/o Beaverdam Mennonite Church, 17721 Route 89, Corry, PA. 16407, or to a charity of one’s choice.
Funeral arrangements are under the care of the Bracken Funeral Home, Inc., 315 N. Center St., Corry, Pa.
To sign the guest book or send condolences, please visit www.brackenfh.com.

Saddens me deeply, such a kind compassionate aunt. I'm grateful I was able to spend time with you most recently. Listening to memories of your past, truly was a blessing. I know in my heart you're with Maynard & Jeff. My deepest sympathy to the family. You will be missed. Lots of love - Frankie's daughter - Tamara Ehrhart Mentzer
- Tamara Ehrhart