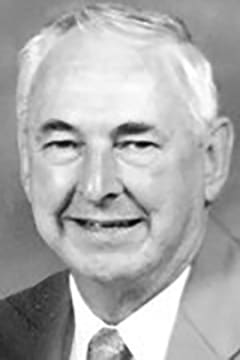 Charles LeRoy Fink passed away Saturday, April 25, 2020, at Parkside North East due to complications from kidney disease. Charles (or LeRoy as much of his family knew him) was born on June 3, 1935 in Saltsburg, Pa., son of the late Roy Fink and Dora (Palmer) Fink Long.
After graduation from Saltsburg High School, Charles entered military service and served as an Army Arms Supply Clerk stationed in Fairbanks, Ala., for 3 years.
Upon completing his service, he returned home and married Ruth on March 3, 1959.
He took pride in his faith, his family and his work – owning every tool imaginable (sometimes multiple versions of them) and could fix most anything.
As a service tech for Meadowbrook Dairy and Cherry Burrell he worked hard to keep the machines running so that milk and dairy products could be produced.
Charles served in the First Presbyterian Church of North East for years as a Deacon and was involved in the Christian Clown Ministry.
He was a devoted husband, father, grandfather and friend. Charles will be greatly missed by his family and many close friends.
In addition to his parents, Charles was preceded in death by his wife, Ruth (Cunkelman) Fink in 2007 and two brothers, David Fink and Donald Fink.
He is survived by his four children; Janice Lee Fink of North East, Beth (Stephen) Seymour of North East, Karl (Dora) Fink of North East and John Paul (Stephanie) Fink of Grand Junction, Colo.
He was a loving grandfather to five grandchildren who could always make his eyes light up with joy whenever they called or visited; Brittany (Andrew) Joseph, Peter Seymour, Paola Fink-Irizarry (fiancé- Danny Smith), Christian Fink-Irizarry, and Levi Fink.
He is also survived by a sister, Bertha (Jack) Cyphert in Ohio as well as many nieces and nephews.
Memorials can be made to First Presbyterian Church of North East or Community Nursing Services of North East who provided caring and compassionate end-of-life care and guidance, Saltsburg Presbyterian Church, or the charity of one’s choice.
Thank you also to his Pastor, Gregg Townsend, for visiting and calling him many times in his final days to provide spiritual support and prayer.
Arrangements will be handled by William Elkin Funeral Home.
Interment will be next to his wife at Edgewood Cemetery in Saltsburg, Pa., and a celebration of life service will be held at First Presbyterian Church of North East, Pastor Gregg Townsend officiating, at a later date due to current restrictions.

Please share a condolence, photo or memory of Charles. We welcome all condolences that are positive and uplifting that will help family and friends heal.